Drone Capable Of Carrying A Human At 100KM Per Hour Unveiled 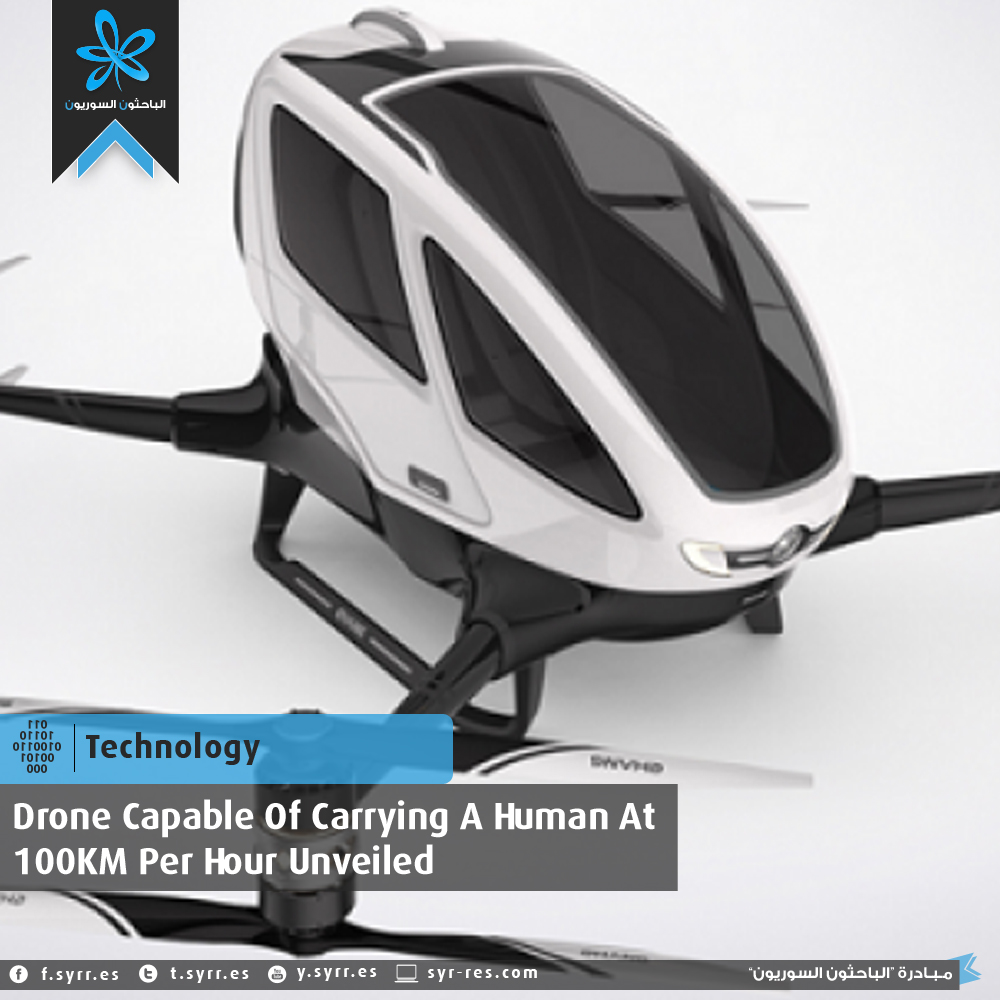 Drones are everywhere these days. The proverbial tool of the future, they are used to deliver aid to war-torn areas, fly over inaccessible lava lakes, and take elaborate selfies. The U.S. military are even developing “vampire drones” that self-destruct in sunlight. Now, a Chinese manufacturer has unveiled a drone that is able to carry humans through the air, which if demonstrated would be a world-first for drone technology, according to CNN.

Although this sounds remarkably similar to a helicopter – and in fact, it strongly resembles one – this new, 5.5-meter-long (18-foot-long) drone by Ehang Inc. has four doubled propellers that spin parallel to the ground, meaning that it is technically a drone in terms of how it flies. The Guangzhou province-based company revealed its latest creation at the Consumer Electronics Show in Las Vegas, along with an accompanying demonstration video.

The Ehang 184’s battery takes two hours to be fully charged up, whereupon it is able to fly for 23 minutes at sea level and carry 100 kilograms (220 pounds). Remarkably, the company claims that this passenger drone is able to fly up to 500 meters (1,650 feet) off the ground, with a potential maximum flight altitude of 3,500 meters (11,500 feet). The drone can also soar through the air at speeds of up to 101 kilometers per hour (63 miles per hour). The cabin is suitable for one person and a small piece of hand baggage.

Along with in-built air conditioning for those hot, drone-flying days, it also features a reading light. Although it may not seem safe to fly whilst reading, fear not: The drone is fully autonomous. By programming your destination into the Microsoft Surface touchscreen interface, the voice-activated drone only requires you to order it when to “take off” and when to “land.”

Going for prices at around $300,000 (£200,000), Ehang co-founder and Chief Financial Officer Shang Hsiao admits that the drone, unlike an actual helicopter, occupies somewhat of a legal grey area. Drones are often not allowed within a certain distance of buildings, and they are barred from entering many transportation hubs, particularly airports. Flying over heavily travelled roadways and government facilities is also a no-no.

In the U.S., national parks are off limits, as are military bases and, after a recent drone crash there, the White House. In many countries, the user of a drone must always keep it within eyesight at all times: This, at least, shouldn’t be a problem for the Ehang 184, unless something goes horribly wrong. Speaking of which, there are no manual controls available for the passenger to grab hold of during an emergency. In the event of a technical problem, the company plans to use a remote control center that would take over the vehicle’s flight and ensure it lands safely.

What makes this drone – a version of a quadcopter – arguably safer than a helicopter is that even if several of the propellers stop working, only one is required to make a landing, albeit somewhat of a bumpy, spiraling one.

According to the Chief Marketing Officer Derrick Xiong, the drone has been tested successfully hundreds of times over forested areas – several times with a passenger inside. With over $52 million (£35 million) raised over the last two years in order to fund the project, the company are hoping that buyers are indeed convinced of its safety record to part with their cash.